I saw Angela’s work at SPRING BREAK Art Show this year. It was the first time I’d seen her work in person, which is crazy because Angela has been in New York and showing for numerous years. What can I say, I like to hermit. It was after seeing this older work by Angela, that I reached out to her to meet up and chat. Funny enough, Angela lives a short walk from me in BedStuy. The world is small in so many ways.

We met up in the late afternoon on a rainy spring Sunday, always the best way to see someone’s studio! Angela offers me some water, and we chit chat a bit about how we’ve never met, yet we have countless friends in common, and of course that we live so near to one another. Angela is easy to talk to and has a relaxed demeanor, which in many ways relates to her work.

Angela leads us down the stairs to a brick lined basement hallway. We go through an arched door into her studio. The ceilings are low, I’d say 6’7” because I’m 6’5” and I nearly hit my head on the lights! Besides the low ceiling, Angela has a spacious studio with a couple of work zones. It feels homey in there as we take a seat on a sofa allowing us to take in the work and the space.

Heisch is a few weeks out from her solo exhibition at Davidson Gallery in Chelsea. She tells me that what I’m seeing in the studio is from the last month. She’s prolific! In some ways we start at the beginning, the work that I had seen at SPRING BREAK was older, its indicative of work she had shown previously at 106 Green too. These are gouache paintings on muslin. Angela tells me more about the gouache process, which is quite involved. Gouache, gave her the matte and flat surface she wanted but was lacking in the luster and depth that she sought.

These earlier paintings were influenced by her observation of her surroundings. Specifically, what she’d see on the train, surrounding architecture, and other visual elements from her day-to-day life. These paintings have a more shallow and sturdy composition. With elements arranged in a sort of grid or architecture. We as a the viewer catch onto the architectural reference, but in various ways are unmoored from a physical reality. These works are of a medium scale, that relates directly to the viewers’ head, a concept Angela goes into more as we talk about the work she’s making currently.

The paintings in the studio are square, besides two small rectangular paintings. I remarked to Angela how you don’t see many people making square work, that it seems like people are afraid of that format. She agrees, and says that it seems natural to her to work on a square format, that her play with symmetry works better that way. We discuss vertical and horizontal formats of painting too, and how immediately it’s either a landscape or a portrait. Nothing new in that jabber, but it’s a good one to have especially when you’ve found another artist who loves a square support! 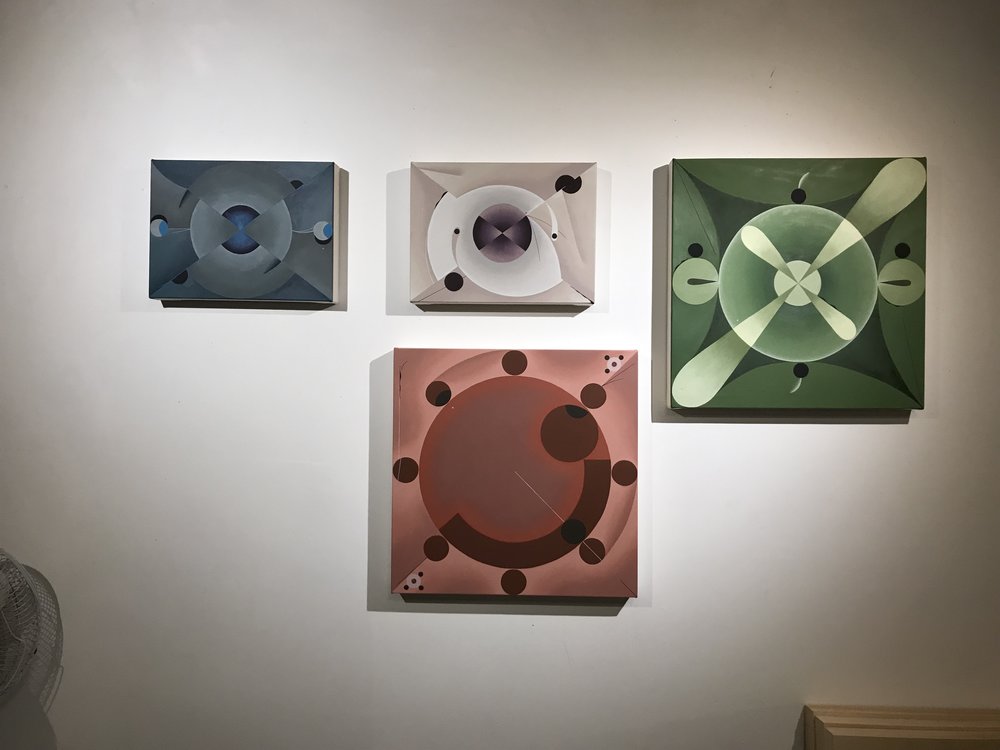 Angela sees her paintings as psychological space. That is space that is both occupied physically and conceptually. The moves on the canvas have a sense of motion, not too unlike many of her earlier works. These paintings feel more playful, something that Heisch throws out in our conversation. Not playful as in whimsical but playful as in the elements of her vocabulary are interacting more obviously. The ‘eyes’ from her previous work appear in these paintings. The new paintings have a circular composition, where the elements interact and spread themselves throughout the access. The ‘eyes’ appear in front and behind elements in the work suggesting that they are in motion and that they’re relating to one another on various planes within the work.

This work is in some ways a transition for Heisch into a new visual language. She tells me that she has her vocabulary from years of working and that elements appear, reappear, and get confused in her new work. The oil paint is serving the work well, it’s allowing her to create more color depth than she was able to achieve with the gouache. The colors are richer as she adds layers of paint over and over, the luminosity of oil paint is a real thing!

The paintings no longer rely on the architecture she sees around her. Heisch tells me that the new work is grounded in reality, but in some ways a more subconscious one. Angela never wants to make work that is totally shut off from reality. She feels that her work would suffer if it was only based on her interior life and artistic vocabulary. I agree, it becomes a sort of cul-de-sac when you’re not in touch with the world around you. In a way, Angela was being a bit cagey about where her ideas are coming from with this work, but that is understandable as it’s fresh for her. I guess we’ll have to wait and see.

I notice three drawings tacked up next to a painting that is in progress. Again, we have the old painter conversation about, “are these prepatory?” A resounding, “No,” is uttered. The drawings do influence the paintings and vice versa but Angela sees them as separate. She does, however, start both the drawings and the paintings with a few thumbnail sketches in her sketchbook. Those thumbnails are a guide more than a blueprint for what will be made. Angela relies on her intuition to allow her paintings and drawings to happen as she makes them.

As we wind down our conversation I’m reminded about how important it is to be in the studio. Angela is a studio maniac, it helps that the studio is in her house. It’s a great setup to have in so many ways. We talk about how you can roll into the studio in your slippers, make some tea, take a nap, have good snacks, and really inhabit the studio. It was energizing to be in Heisch’s studio because she is going full bore into new work, seeking a direction forward in a media she hasn’t used in some time, and a new visual language. I for one am looking forward to seeing what she makes next!