stuff, 23 May 2021
Open a larger version of the following image in a popup:
Share

More than anything, Angela Heisch is grateful.

There was a time when the Kiwi-born, New York-raised artist hungered for the day she would simply be paid to paint. Surpassing that goal and then some, now her mesmerising abstract works are not only selling like hotcakes, but are garnering critical acclaim from art world dignitaries.

This September, at London’s Pippy Houldsworth gallery, she will deliver her first international solo show.

It’s a pretty big deal, and what Heisch describes as a “career milestone,” but she’s still wary of getting ahead of herself. All of this could “disappear any minute,” she says. 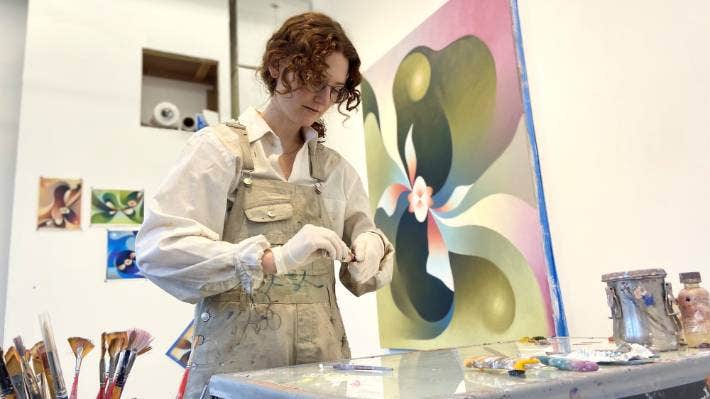 It was in Auckland’s leafy Mount Eden suburb, at the home she shared with her Brit-turned-Kiwi father and New Yorker mother, that Heisch first became interested in art.

As an illustrator, storyboard artist and graphic designer, her dad spent a lot of time painting and drawing in his backyard studio. Heisch was often there too, watching, learning; dreaming.

She was 10 when the family moved from Auckland to New York’s industrial Buffalo region. The backyard studio was gone, but the seed had been sown.

Her education trajectory saw her gain a Bachelor in Fine Arts at New York’s Potsdam, a Masters in Fine Arts at the University of Albany and a fellowship in Brooklyn, where she has resided for the past six years.

“It’s really hard to leave New York when you move to New York,” she admits, attributing this to the city’s consistently “happening” art scene. “There is always room to grow here, and you never really feel as though you’ve made it, so you just keep striving for more.”

London, she expects, will be much in the same vein. The artist is currently in the midst of preparing for her trip and creating her Pippy Houldsworth destined oeuvre. Titled ‘Burgeon and Remain’, the show will comprise a nature-inspired body of works that focus on “growth, movement and containment”.

It’s a running theme through the majority of her canon: vibrant colours and patterns extending off the canvas, flourishing and growing like organic matter right before the viewer's eyes. 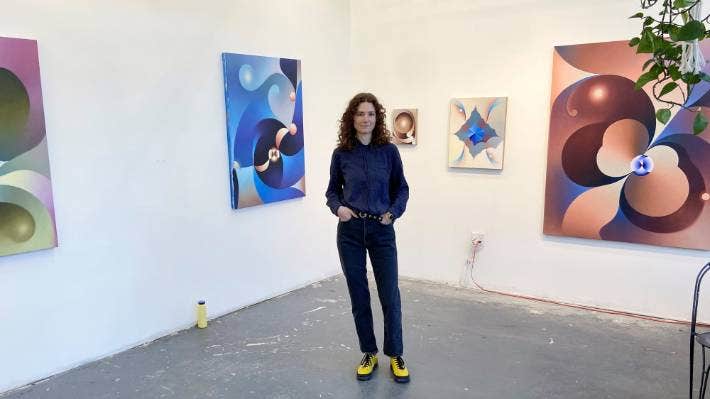 All are the by-product of a stepped creative process, she says, which has been refined over time.

It all starts with a simple thumbnail sketch, an idea that’s then elaborated into a chalk pastel drawing, which in turn guides Heisch when creating the bones of the oil-paint-on-canvas finished product.

Upon first glance, Heisch’s enigmatic creations could be anything: a blossoming flower, a spinning cosmos; pulsating ocean waves.

Captivated by surrealism, she says she likes to “present the viewer with that sense of unknown” in order to allow them to bring their own associations, memories and experiences to the paintings.

People are often reminded of aspects of their day-to-day lives - a response she openly welcomes.

She’s come a long way from her beginnings, a time when she would find herself “really frustrated” when others loaded their connotations onto her work.

“I wanted my works to be these mysterious forms,” Heisch laughs, “and I would get annoyed at people loading all of this stuff onto them”.

Now, she realises “it’s selfish” to dismiss those different meanings. “That’s the beauty of it, the fact that everybody experiences something different. That’s what abstract art does!”

These days she’s simply grateful that people are interested in her works enough to discuss them.

Heisch is certainly an artist worth keeping an eye out for.